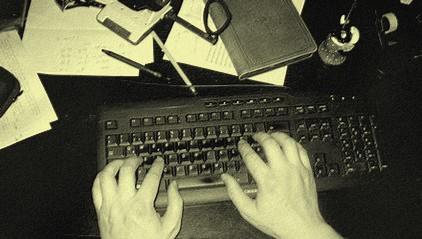 Living is learning. I guess I was granted some lessons which proofed useful for my writing.

»Just a moment!«, I hear you shouting. »That's all nice stuff, mister Corvus – but what makes you a writer?«

First, I am interested in fantasy so long that I remember having to draw a comparison to the Nibelungenlied to explain to my classmates what kind of stories I read. I knew Robert E. Howard and J. R. R. Tolkien long before they became a hype. I am not the most literate person in the world, but you rarely meet me without a book, and often it's speculative fiction – but I also cannot rebut the rumor that people caught me with a novel by Rosamunde Pilcher. In my youth, I weekly met a very special friend: Perry Rhodan. I read slowly, but with joy and much, and really rarely get disappointed by a book.

When it gets down to the bones ... 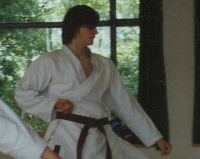 »You should know what you are writing about«, you say?

I always stress that imagination is an author's most important talent. But I hope I can assure you a bit. When fighting scenes appear in my books, they are dramatized, of course, but you don't have to be afraid to read something completely outrageous. Although I consider myself lucky for never having been in a physical fight on life or death, I once was a Karate coach. In my heyday I trained from two to eight hours daily. I liked to train a bit on the other side of the fence, as well, so I got some basic knowledge in Ninjutsu, Tae Kwon Do and Aikido. That's long ago, but the basic logic of a brawl still is clear to me, I think. And concerning battles on a large scale – well, my year in northern Germany's infantry must be good for something, after all – what do you think? 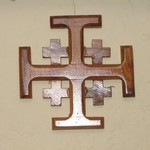 Mysticism plays a large role in fantasy, as well. Don't worry, I do not believe in the real existence of magic and spiritistic sessions are alien to me – I believe those concepts belong in the realm of imagination. But I am a religious person. A constant in my life is my catholic faith. I like pilgrimages and I am one of those who attend church service every weekend and don't eat meat on Fridays. I can see your concerned look – no, I don't think that my writing is inspired by the holy spirit, but religiously motivated protagonists are well known in fantasy and religions as a sociological factor are an important element in science fiction. Although exotic religions are portrayed there, I still believe that I can draw from my own experience to describe such motivations and thereby design believable characters. 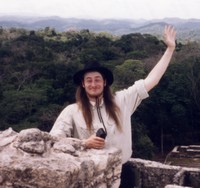 Talking about exotics: I believe, ›sense of wonder‹ is important not only in science fiction, but in the entire realm of speculative literature. I'm a curious person, I want to learn to know what I do not know already. So, in 2004 I took a year off and traveled the world with a backpack. I have been in the jungle of Guatemala and slept in the wagons of the Indian railroad, took a stroll in Myanmar and laid a hand into the hieroglyphs of Luxor. In Bei Regen und bei Sonnenschein you can read my memories of that travels.

Using such opportunities, I try to understand how societies work using premises completely different from our own – maybe the main theme if you look at my stories overall.

Nevertheless I stick with this: In speculative literature, you want to read what nobody has seen or experienced so far – that includes the author, and so imagination stays the most important gift of the writer. 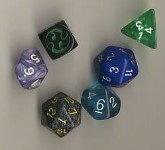 As far as my memory goes, I liked to tell stories. In childhood days I spoke them to audio cassettes, but also in my school essays I never experienced problems to make the minimum length – the maximum length caused me more trouble. In fantasy, my storytelling started as a game master in role playing games. My friends and me went through an extreme phase, in which we had fixed appointments six days of the week to explore fantasy worlds. At sixteen, I joined a fantasy club spanning the German speaking countries, which had a focus on literature. Back then the internet was far less important than today. Especially, it was uncommon to publish texts on web sites – there were fanzines instead, fan magazines, which are financed on a cost-plus-zero basis. My club also had such fanzines, in which I published my first stories, and finally, in six episodes, my first novel. 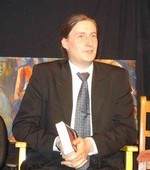 I also was active in Cologne's literary underground. I seized the opportunity to read my texts in the back rooms of cafés and finally was able to place the first of them in anthologies in this environment. Without payment, without cost.

In 2005 , my first novel was published, the apocalyptic vampire thriller Sanguis B. Vampire erobern Köln (›Sanguis B. Vampires take Cologne‹). Back then, vampires still were the bad guys, and accordingly dark the story is. 2007 I was permitted to join the Fantasy Productions novel series, first ›BattleTech‹, later ›Das schwarze Auge‹. Both I already knew from a fan's perspective, which is why I am especially happy that I am now present in this cosmos with some pocketbooks. Today, Ulisses continues these series.

Those who are interested in this area of my work might want to look out for my pen name Bernard Craw. Today I do not use it anymore, all of my current publications are done as Robert Corvus.

Where I stand and where I look

With Die Schattenherren (›The Shadow Lords‹) I arrived at Piper publishing house, in addition I contribute to PERRY RHODAN, and since 2016, Heyne publishes Die Phileasson-Saga (›The Phileasson Saga‹), which I write in collaboration with Bernhard Hennen. Everybody who is into the speculative literature in Germany probably came across my name sometime. Round about once a month I do a reading or attend a similar venue. If there is only a small spot for speculative literature in the heart of a bookseller, he will have a book of mine in the shelf. In calendar week 39/2017, Bernhard Hennen and I even hit Germany's main bestseller list with our joint work Silberflamme, which also happened with other works in the Phileasson series later.

There is no reason to take a rest, though – I am still curious to find out what's out there to be discovered. In speculative literature and beyond, an endless space opens to tell adventures beyond the realm of the known. I got a long list of projects I would like to see published. For some, I already got a publishing partner, others are only vague ideas until now, waiting to crystallize into an outline.

On this web site, I compiled some information on my current writing, which I hope you find interesting.


I thank you for your attention and wish you a lot of joy with my books.